Fraud is an integral part of life: what can we do about it?

Fraud is an offence of dishonesty, like theft, but with a special feature: it is committed not by stealth or force but by one person in some way influencing the mind of another so as to persuade that other to do something to his own detriment and for the benefit of the fraudster.

To put it simply, fraud involves the use of a trick.

If only it were that easy. it isn't.

plus UK VAT where applicable

We have a problem. Dishonestly might be in our DNA. It is certainly part of our basic, psychological make-up - and a significant part of our natural dishonesty is fraudulent.

So, with that as a starting point, we must recognise that it's going to be very difficult to consider dishonestly and fraud as inherently wrong.

I'll explain.... but first we must look at the three stages of dealing with fraud: they are pre-active, reactive and consequential and our three speakers today will deal with these in order.

Pre-active steps are how we try to identify fraudsters before they make an attack. This is difficult because, often, until the moment of attack, fraudsters look like every other customer.

Reactive steps are those that are focussed on recovery. Civil recovery is hampered, compared to criminal investigations, but if a victim is fast enough, or persistent enough, recoveries do happen. It will almost always start with an internal investigation which may be considered hostile (but should avoid aggressive) because, as dozens of reports say, 80% of fraud against companies includes inside involvement.

Consequential matters are identifying the reasons that the fraud was not identified and stopped, blocking those access points and using that case as a model to develop techniques for identifying other weaknesses. This, whether or not we like it, is an internal investigation, not looking for scapegoats but looking for information.

We have to understand that we are introduced to dishonesty at a very early age: some is out and out lies - the tooth fairy, for example. Some is shaded truth such as "daddy will be home soon," when a child refuses to go to bed without a goodnight kiss. Some is well meaning fiction such as "mummy will kiss it better" for a scraped knee. This latter example is a demonstration of the psychological power of lies. And everybody tells "white lies" to protect the feelings of someone else, for example.

We grow up with an entire industry creating the suspension of disbelief: that is the creation of an environment which, albeit for only an hour and a half, or so, displaces reality. Horror films make us jump. Films of a skateboarder racing down a mountain road make us lean one way then the other.

Fraud, then, is as much about our own susceptibility as it is about the skill of the fraudster.

The techniques of the fraudster are auto-suggestion, persuasion, even seduction. Sometimes it's making the victim join a herd and other times it's creating an element of fear that, if the victim doesn't do something, adverse consequences will flow: we can consider this to be a mild form of extortion.

A machine cannot be defrauded because it has no mind upon which the fraud can operate. However, while criminal law does not recognise fraud bya company, it does recognise fraud against a company, in this way creating diametrically opposed positions: it is inferred that a company is sufficiently sentient that it can be the victim of fraud but it is not sufficiently sentient to form the intention to defraud. How can this be? It's another lie - in this case called a "legal fiction" - where the company is the victim. It has to be noted that companies have long been subject to prosecution where there is an absolute offence, i.e. that no intent need be proved. Also, things have changed and laws are being introduced which specifically provide for a company to be guilty of e.g. failing to prevent bribery, fraud or money laundering. It's a long way from imputing intent to defraud but it's travelling in that direction.

We thank the following sponsors for their support

Attending The Financial Crime Forum lets you earn Portable CPD* credits which, where recognised, may be used for your professional CPD. Note: even when Portable CPD* is not formally accepted, it may be accepted under the general "reading" or "attending lectures" classes that many professional bodies provide.

*Portable CPD is a trademark of Vortex Centrum Limited.

For the month in which the Forum is held, full price
For the preceding month: 50% reduction
For the anti-penultimate month, 80% reduction.

The earlier you book,
the less you pay 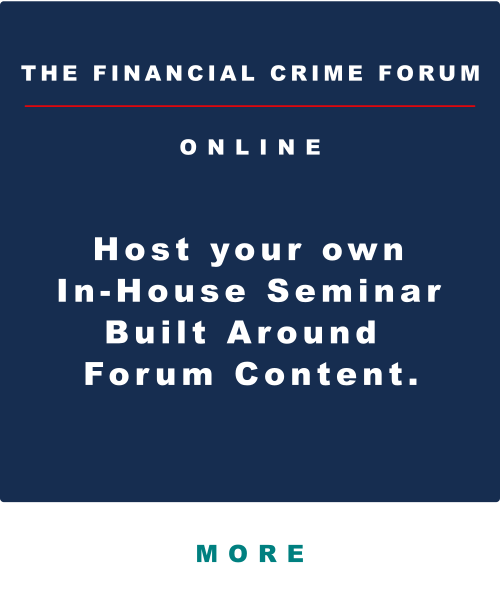 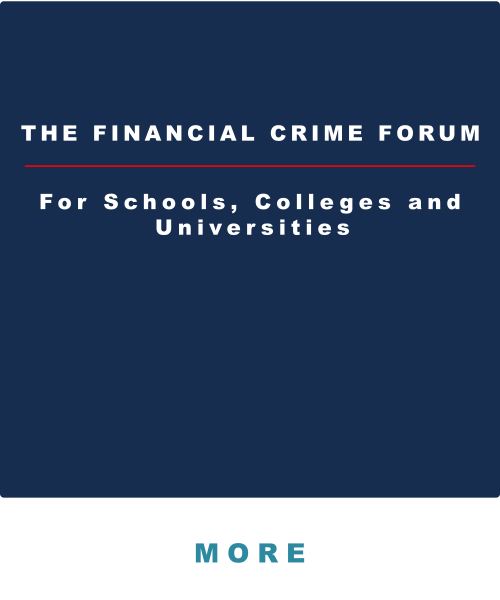